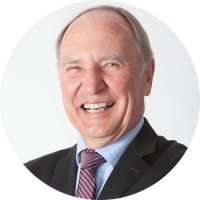 William “Bill” Karny, M.Ed., president of the Colonel Harland Sanders Foundation (USA) and vice president of Harland Sanders Charities of Canada, is an international leader, philanthropist, educator and humanitarian. The proud father of two daughters and grandfather to two granddaughters, Bill’s passion for helping kids succeed extends back to his early career as an educator, teacher and K-12 principal. A resident of British Columbia, Bill’s leadership in education includes serving as a director of the British Columbia Teachers’ Federation.

In more recent years, Bill’s commitment to children with special needs has grown deeper since his granddaughter, Charlotte, was diagnosed with autism. He has been a champion for children and adults with an autism spectrum disorder (ASD) throughout North America, linking organizations and special interests together into an entity affectionately referred to as “Charlotte’s Web.”

Bill serves on the First Place® AZ advisory board. He also serves as a director of The Sinneave Family Foundation and a member of the advisory group of CAN Assists at the University of Victoria. He is committed to the most promising and hopeful outcomes for individuals with autism at every age.