A Community Smiles: Building Hope for Adults With Autism 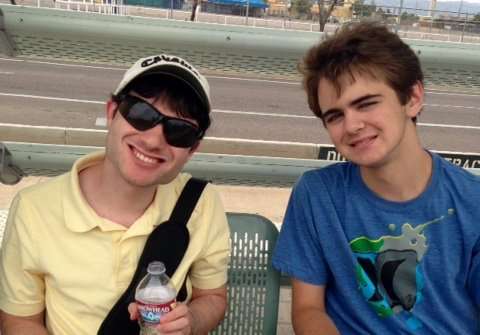 Cleaning out closets, drawers and the garage seemed like a good plan for ringing in the New Year. Matt’s closets took the longest. The biggest challenge: parting with the cue cards, flashcards, Velcro-backed picture cards and all kinds of games, systems and tools that have helped Matt learn, communicate and advocate for himself.

Still significantly impacted by his autism, Matt’s perseverance and our own have empowered him to learn, connect and enjoy the benefits of a job well done. In 2013, Matt launched SMILE Biscotti®, his Phoenix-based baking business in 2013, to further his independence.  It has done much more than that already! SMILE reflects daily how the early intervention and many efforts through the years have paid off.  While completing over 100 holiday orders late last year, we saw new evidence of Matt’s supervisory skills, as he modeled for co-workers how to more efficiently package their biscotti, quietly correcting a few of their mistakes along the way.

Community building is something we’ve been demonstrating in Greater Phoenix for nearly two decades through SARRC®, and now First Place AZ®. For us, community speaks broadly to embrace differences and celebrate diversity; involving our neighborhoods and schools, places of work and worship, health and wellness centers, and creation of new home options.I also paused to reflect on our unexpected life’s journey while reading the newly released historical account on autism, “In a Different Key,” written by  journalists John Donvan and Caren Zucker. Powerfully written, informative and captivating, the book evokes the many struggles, triumphs and chapters of our life with Matt, which were shared by the pioneers in the field and those who have joined the fight since his diagnosis.  Caren is a fellow mother on a mission who reinforces, “how good a life can be when your community embraces you!.”

SMILE Biscotti’s success is a beautiful example of how a community has embraced Matt and his coworkers. Also noteworthy is the community they’ve built together, connecting through teamwork, common interests like “Uno” breaks and shared satisfaction of a job well done. These young adults and hope are the most important ingredients in SMILE Biscotti.

I’ve clung tightly to my hope. Hope that the California doctor who confirmed Matt’s diagnosis was wrong when he said, “love, accept and plan to institutionalize him.” Hope that his epileptic seizures could be controlled and not stand in the way of greater independence. Hope that he would find a community where he can live successfully and happily with friends and away from our family home.

What I didn’t find in our closets or in those three-ring, four-inch binders documenting Matt’s history was a roadmap that would predict his future — something I longed for during those early years. I wanted someone, anyone to tell me it was going to be OK, that he was going to be fine, as would our entire family. Instead, we created our own hope and dreams together with other parents, family members and a supportive community who wanted the same outcomes.  And together, we are moving mountains.

Excited to share more in the year ahead about the expansion of SMILE Biscotti, groundbreaking of First Place-Phoenix, a new residential model for adults with autism and other special abilities, and more community building, big dreams and history in the making.  Onward!