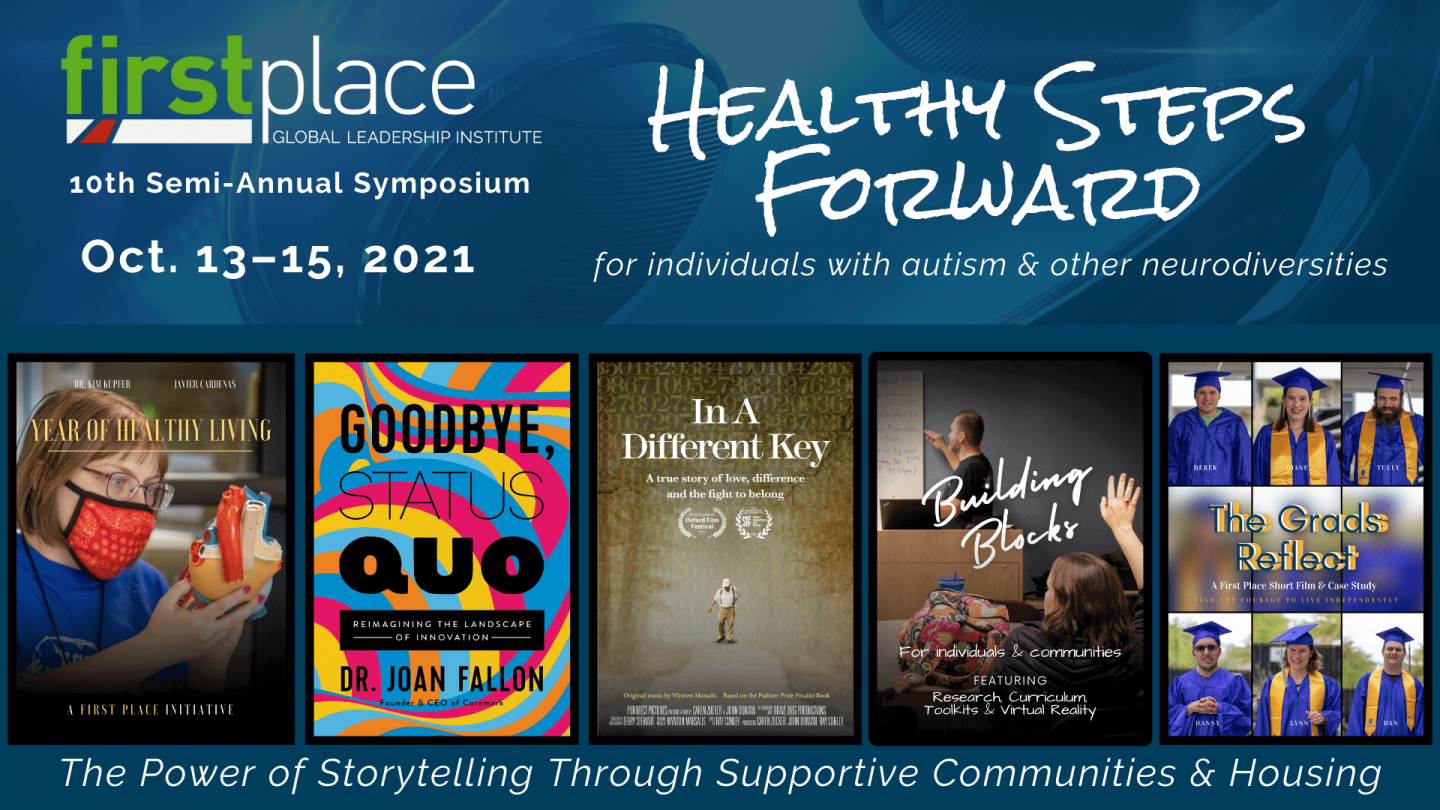 Be a Symposium Sponsor! Learn more.

Join us for the 10th First Place Global Leadership Institute Symposium, Oct. 13–15, delivered in person and via webinar. Benefit from decades of research and community-building know-how, along with experiences and strategies for navigating opportunities and challenges inherent in real estate and community development.

Take advantage of our powerful and in-depth three-day program—and build momentum for your supportive community, vision, funding needs and healthy outcomes. Learn how to inspire and engage others to be part of changing the world for those we serve.

Changing the World, One Community at a Time

In A Different Key: The Movie–Screening

Enjoy an exclusive screening of “In A Different Key: The Movie,” the first-ever full-length documentary to travel the timeline of society’s tense and sometimes misguided response to people on the autism spectrum.

The Future Starts with You

The producers of “In A Different Key: The Movie” are launching their Multi-City Mission Tour in Phoenix. From First Place in Phoenix, AZ to the Frist Center for Autism and Innovation in Nashville, TN and several cities in between, learn more about the film and how you can be involved. "We are excited to partner with committed organizations and community leaders to share In A Different Key with their audiences, working together to inspire the world to have the backs of people on the spectrum."

Reception, discussion with authors/filmmakers and networking

Your Story from Prologue to Epilogue

Critical Markers and Milestones Along the Way

What to know before getting started on and during your real estate and community development journey.

Broaden Your Reach by Accessing Trusted Sources and Content

Expand your search beyond Google and ad-sponsored platforms to discover vetted sources, empowering you to advance your research and inform your plans, process and funding streams.

Be the change agent in your community and beyond, embracing innovation and disruption. “Having perspective is really important. Use peripheral vision to see what is around, allowing you to enhance the effectiveness of your work and organization.”

What’s needed and how it gets funded, built and supported through tri-sector leadership and collaboration.

Learn about available tools and trainings that help police officers bridge the communication gap and interact more effectively, and positively, with individuals with autism spectrum disorder.

Your Story. Our Story.

Meet Arizona Republic breaking news reporter and woman with autism, who regularly covers topics that include disability and religion, along with producers of "In A Different Key: The Movie," whose multi-city film tour begins in Phoenix. Discover their passion and how you can be part of their shared mission to connect communities and support everyone on the spectrum. Learn what influences news content and placement across various platforms and how to represent all voices.

Draft your most desirable headline(s) along with the major points of your press release and envision corresponding images; benefit from approaches by fellow pioneers and journalists’ input.

Impact the culture of your police force through training and tools addressing challenging behaviors, sensory processing issues and strong partnerships: Nancy Martinez, Investigative Specialist for Chandler Police, trainer of more than 2,000 first responders and mother of a son with an I/DD.

What’s Standing in Your Way

Beyond bricks, mortar and funding, explore what may be holding you back—and what can get you through the detours and over the speed bumps.

Building Community Through Autism + One

Set a high bar through the power of our examples—in the real estate we develop, collaborations we foster and communities we build.

Build a healthcare equity model where no one goes untreated or is medically misunderstood because of autism and other related disorders.

Inform and expedite your journey based on decades of research, uphill climbs, trailblazing and results.

10 Actions to Engage Your Board in Storytelling

Align board interests and know-how with fundraising goals, transforming members into powerful storytellers and effective fundraisers.

Build for Strength and Resilience

Roll up your sleeves for this community-building exercise and learn from leaders in this space.

Ensure your content is authentic, credible and powerful and allows you to tell your story at the right time and in the right place(s).

Building and Strengthening Your Bench

Identify strategies for board diversification, engagement and expanded circles of influence beyond gender, socioeconomics and ethnicity to advance your goals and ensure you make promises you can keep.

First- and second-year Transition Academy participants reside at First Place–Phoenix, practicing what they learn in their own apartments—also called “independent living classrooms.” But that’s not where we started!

In 2015, First Place established the Transition Academy independent life skills program at 29 Palms in Phoenix, our beta site, before incorporating it into First Place–Phoenix in 2018. A development of the Foundation for Senior Living (FSL) in collaboration with First Place AZ, the Southwest Autism Research & Resource Center (SARRC), the Arizona Dept. of Housing and the Arizona Community Foundation, 29 Palms incubated the program where students lived among supportive senior neighbors.

Transition Academy graduates can now continue living on their own at 29 Palms—no longer as students but as neighbors themselves. A second, similarly situated property, Spectrum Courtyard Apartments—where Academy graduates also currently live—opened earlier this year.

*Space is limited, so reserve your spot now!